What is it to have a voice in the world ?


I think it's a pretty big deal for anyone to have a voice that's truly theirs in our world today.  With everything and everyone telling us what to be (through media, pictures, facebook, linkedin, newspapers, TV, parents, school.....and the list goes on), it's hard to know what we actually think and believe about life.  It's so hard to extricate ourselves from our loaded world for long enough to know what we think, feel or sense in ourselves.

As I call to mind people who, to me at least, have a clear and strong voice in the world that resonates with me, and I get curious about them, they're mostly not pedalling the same old messages of our sleeping world.  They're speaking of rebellion, peace, freedom, kindness, compassion, vulnerability.  And there are many people who are so hypnotised by the current 'normal' thinking and perception of the world that instead of giving things a chance and a listen, they actually fight them.

I wanted to look at something on homeopathy yesterday (I'm really ill at the moment and I have a virus so I have a perfect opportunity to research homeopathy in my own experience and read up on it) and googled "how does homeopathy work?" and when I typed it in to google, a sponsored (yes sponsored) ad came up at the top of the results of a site called www.howdoeshomeopathywork.com and then when you click on it it is just one page with huge letters saying "IT DOESN'T".

It got me thinking about how much people with something valuable to say (in this case the large list of people who hold homeopathy as an important practice, research or medical system in their lives), but which isn't in the mainstream, have to go through in the face of holding to their truth and the message they want to convey to the world.  There are people invested in (financially and otherwise) in holding us exactly where we are - heading for meltdown probably.  I'm astonished at the world - that we can't just allow each other to explore, that we continually defend ourselves in the face of new thinking.

And I realise I am defending those of us who have something different to say than the mainstream media topics, but I think we need to stand for something strongly and peacefully.

What I stand for is each of us having our voices and letting the world know about them.  I stand for the belief in us all that we have something important to share because we are here, we were born.  And when I mean 'say' and 'voice' this could be the way we greet people, the presence we are around one another, what we write on our blogs, the radio shows we create, the articles we contribute, the films we make, the photographs we take, our instagram accounts.

Here's to our voices and how harmonious they may or may not be!
Posted by Unknown at 4:02 AM No comments:

The unsaid (and said) expectations of our worlds, the pressure we put on ourselves. The 'norm'. What a huge amount of suffering this creates.
What are the things you feel are expected of you in your life in terms of how much money you should have, what kind of house you should live in, what your relationship should be like, whether you should have children or not, what your body should look like, what clothes you should wear, how you should behave? And the list is endless.
So many of these things are powerfully and subtly dictating the hard time we are giving ourselves.  As human beings we are in constant relationship with the world around us, the images we see, the things that are spoken, the spaces we move and sit in. Deeply in out backgrounds we find (if we really look) that the world around us is asking things of us, inviting us to think, believe and see things in a certain way. And if we don't get conscious of it, we unconsciously lives that are not ours, putting pressure on ourselves, wasting our precious time with things that are not the highest expression of who we are.  And our spirits are caged, diminished and held back from the world in their fullest expression.
Our bodies become comparable to photoshopped models, our homes become comparable to shoots on OK! Magazine, our children become comparable to the ones on the fabric softener adverts. And that's only the start.
Freedom from the 'they', freedom from what the world is telling us to be, freedom from the imagery we compare ourselves to. Imagine a life outside the they where you get to choose what's important, you get to live how YOU want to live this one precious life.
Posted by Unknown at 1:44 AM No comments:

What if it was true that all our efforting, all our trying was in service of something that's coming for us anyway. How would we feel ?

A wonderful person coached me on the theme of surrender a little while ago and had me read this poem many times, and it has me in it's grips, my curiosity will not let it go. It can feel so wrong to surrender, but the personality isn't into true freedom so no wonder it steers away from it.

I can tell by the way the trees beat, after
so many dull days, on my worried windowpanes
that a storm is coming,
and I hear the far-off fields say things
I can't bear without a friend,
I can't love without a sister.

The storm, the shifter of shapes, drives on
across the woods and across time, and the world looks as if it had no age:
the landscape, like a line in the psalm book,
is seriousness and weight and eternity.

What we choose to fight is so tiny!
What fights with us is so great.

If only we would let ourselves be dominated as things do by some immense storm,
we would become strong too, and not need names.

When we win it's with small things,
and the triumph itself makes us small.
What is extraordinary and eternal does not want to be bent by us.
I mean the Angel who appeared to the wrestlers of the Old Testament:
when the wrestlers' sinews
grew long like metal strings,
he felt them under his fingers
like chords of deep music.

Whoever was beaten by this Angel
(who often simply declined the fight)
went away proud and strengthened
and great from that harsh hand,
that kneaded him as if to change his shape.
Winning does not tempt that man.
This is how he grows: by being defeated, decisively, by constantly greater beings.

Posted by Unknown at 1:00 PM No comments:

You did not come here to be normal!

So much of the time we are comparing ourselves, trying to 'fit in', be 'normal' like everyone else. And it causes us all manner of pain and problem because it's impossible to live up to what we 'think' others are in terms of relationships, success, money, job, stuff. Because what we think of them isn't true, it's just what we think of them. I love this quote from Robert Holden - reminding us that our naturally unique selves, the circumstances and relationships that are only ours are what our lives are about. There's nothing to fit in to anyway. Not really.
Posted by Unknown at 12:59 PM No comments:

I have been watching the part of my mind that wants things to be done already, that wants life to be completed somehow. I think it's the 'arrived' feeling that I deeply want to experience that I project out into the world, thinking the world is going to do it for me.

This Buddha quote is so simple, and yet there's so much truth in the fact that we only really get anywhere by taking one small step after the other in the direction that our heart tells us is the way to go. 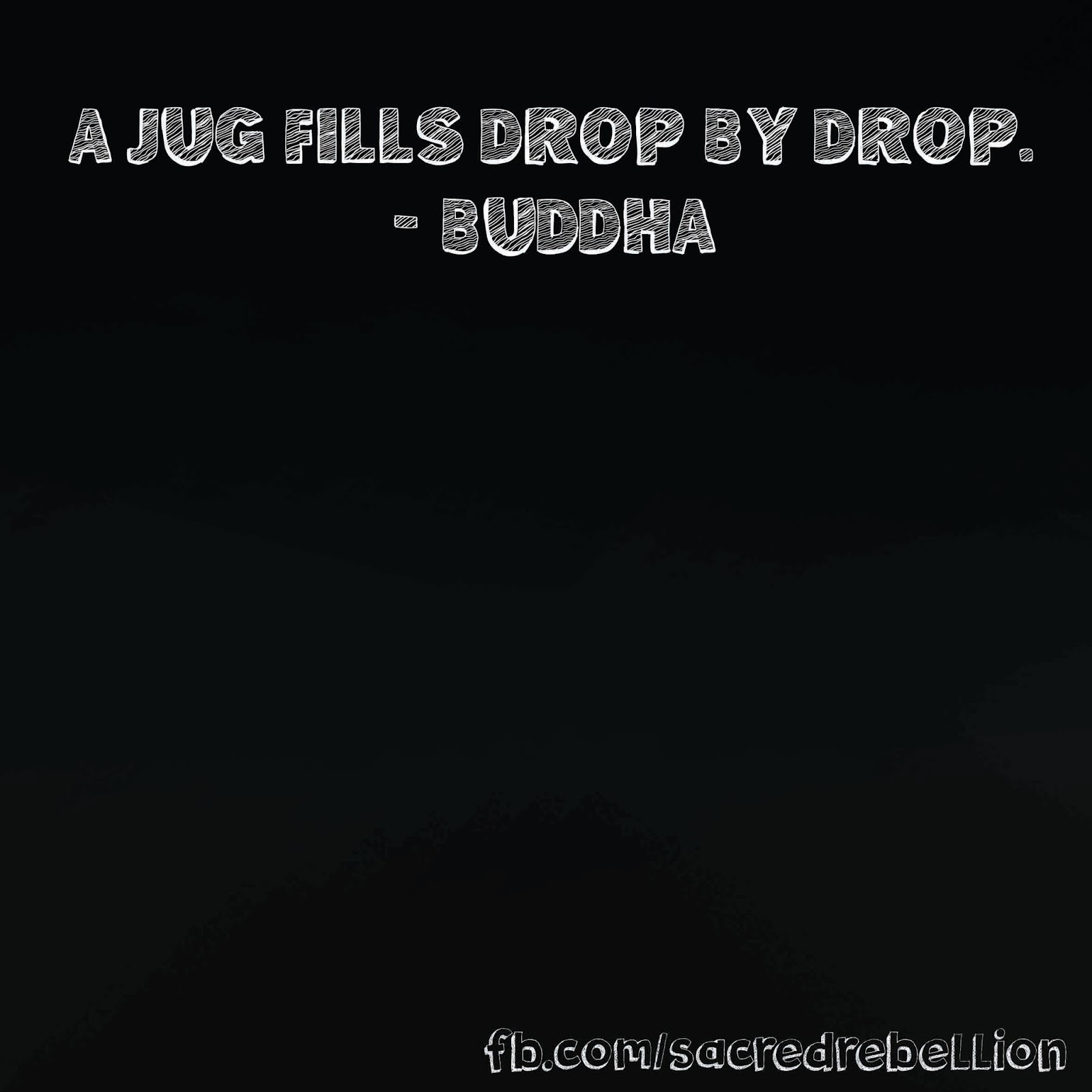 Sometimes the small steps don't feel like they're big enough, good enough or significant enough, but the more and more I look around, the most successful people, the most fulfilled people have taken millions of tiny steps and a few big ones. But most of them are small ones that end up being strung together to make a life, to fulfill a dream.

Here's to our small steps and the path we carve by putting one foot in front of the other in the direction of our dreams.
Posted by Unknown at 12:57 PM No comments:

This is my definition of spirituality today

Making a conscious effort each and every day, and in as many moments of my life as possible to remember that there is a huge possibility that what I see is not what’s ultimately true. It’s a remembrance that this life is not fixed, there’s nothing that warrants being taken for granted as known.

We have learned definitions for things in life but that’s not to say these definitions are accurate or that we should stop our enquiry at our current understanding. It’s an opening up to a way of being that allows things to be what they might be, not what we think they are. 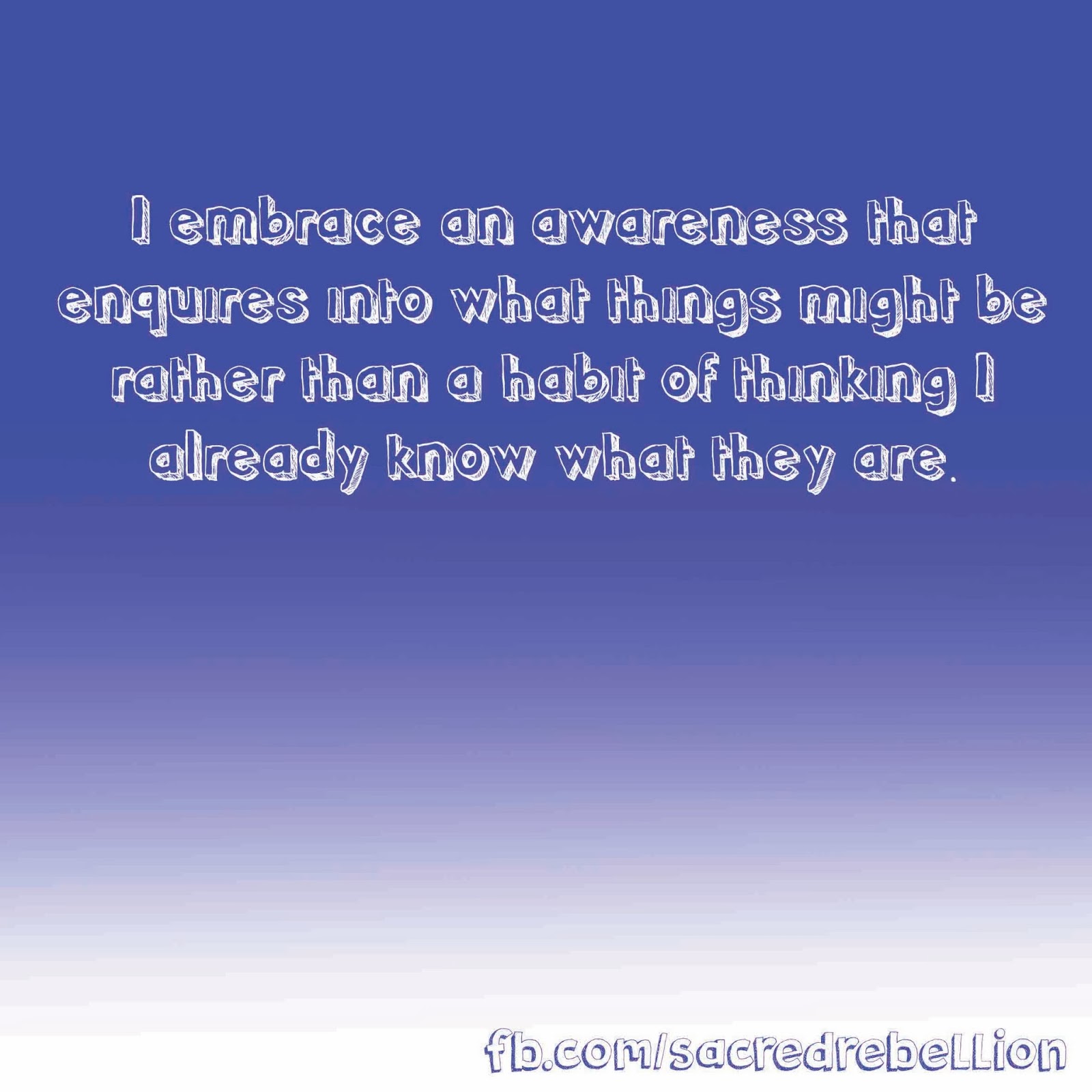 Every human, every thing I can conceive of is not what I think he/she/it is. What if I could open up to what things and people are pointing to instead of believing that they are fixed and unchanging ?
Posted by Unknown at 12:58 PM No comments:

How do you give what you haven't got ?

A huge part of 'growing up' is releasing the expectation that the world should provide, the world should meet me, 'see' me. In growing up, we come to realise that we are the 'world', and it's our job to joyfully provide - it's not up to anyone but us. The world and me are not separate from one another.

In my experience this is a solid orientation that has always taken me out of the victim state when I've really felt it and applied it to my life. It's reoriented me so I no longer see the world as 'happening to me'. It's one way that I have learned to take my life in my hands, one way that I know leads me to reflections that usher me towards being powerful in the way that I wish to be. 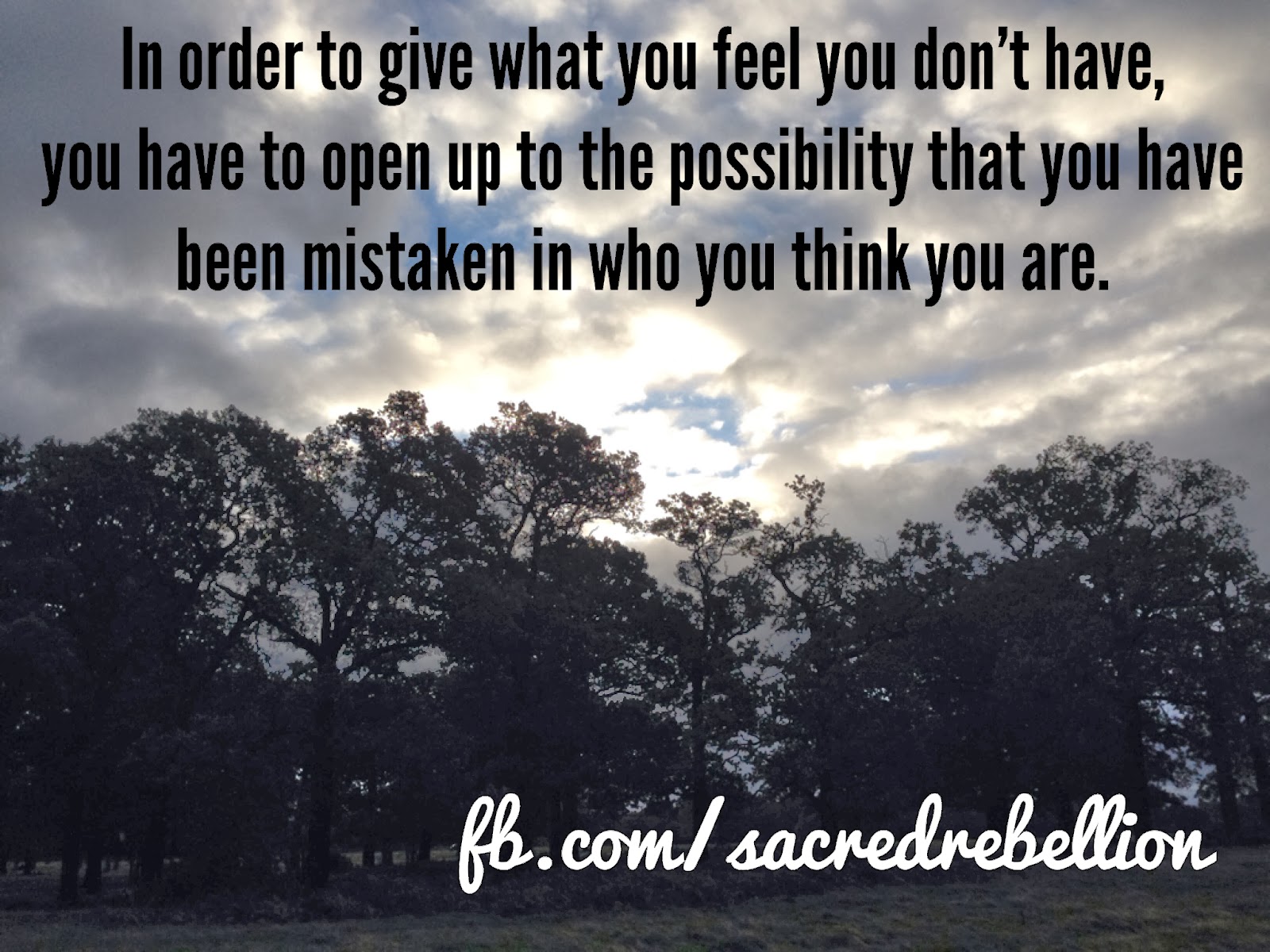 And the other day, I realised that I didn't have the thing I wanted to give. I knew it wasn't up to anyone but me. But I was stumped. How am I supposed to give someone something that I perceive was never given to me? How do I bring something when I have no idea what it even looks like, feels like?

And I saw that this is another way my super sneaky ego is trying to keep me the same. My personality (who I think I am) can't imagine bringing something I don't feel capable of. A small voice can still be heard though, and it says "who I really am might be able to bring it if I just gave it a chance". I saw that in the moment of lack, I could bring my consciousness to the feeling that I don't have it to give, and I could take one small step to bringing it.
Posted by Unknown at 12:56 PM No comments: